Committing crimes in 140 characters: the criminal law against hatred and radicalization on the Internet

On December, the CiberHache project was finalized, funded by the Spanish Ministry of Economy and Competitiveness (DER2014-53449-R), coordinated by CRIMINA Center for the study and prevention of crime (UMH), and in which more than one fifteen national and international researchers at the highest level have studied the incitement to violence and hate speech on the Internet, considering the real scope of the phenomenon, typologies, environmental factors and limits of legal intervention.

Summary of the book:

Show joy at the death of a public figure; to desire the death of someone, or the worst of destinies, for their ideas, for their tastes; threaten, more or less veiledly, a person, with a more or less concrete evil; defend different forms of violence because of ethnicity, religion or gender; incite to carry out violent or unjust acts against others; show unpleasant, offensive and violent images and make fun of those who are humiliated in them; transmit extremist ideas and defend intolerant ideologies. None of these behaviors are original or exclusive to social networks, but it seems that, given their proliferation in some of them, the exaggerated social alarm they have generated and the number of judicial decisions that have prosecuted them in recent years.

This collective work analyzes the response of criminal law to modern expressions of hatred and to messages of radicalization on the Internet, based on the observation that punitive margins may be growing in practice while those of freedom of expression diminish. Despite the reference to the 140 characters, it does not focus exclusively on Twitter. Neither the reflections of the criminal, constitutional and legal philosophers that make up this book are only valid for hate and radicalization communicated through the Internet, but for any other modes of communication of such messages. Yes, however, special attention is paid to this means of universal expression and communication, because it is the supposed ability of the Internet to transmit radical ideas and hatred and configure a more intolerant and violent society that has determined the growing concern social phenomenon because of the phenomenon and the legislative reforms and judicial decisions that, with a critical spirit, are analyzed here. 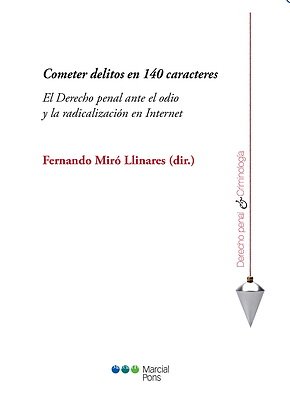